Price / Where to Buy

ASUS has been on a roll these past few releases and while they have kept their line-up pretty much distinct from each other, it is with the introduction of the PRO and PRO GAMING series that we’ve seen them slowly trickle down the premium ROG features to the more mainstream line of products. Now with the Intel 200-series, Intel is completely revising their mainstream gaming lineup with the introduction of the new ROG STRIX motherboard. Prior to their debut, the ROG STRIX has been ASUS’ primary GPU branding for the most recent generations of graphics cards. The ROG STRIX motherboards will share the same designation as the primary brand for mainstream consumers looking for a motherboard that inherits ROG features on a more attractive price range.

In this week’s we’ll take a look at two motherboards from the ROG STRIX family who will be taking the place of the mATX and ITX form factor offering from main ROG line. In this review we have the ASUS ROG STRIX Z270I GAMING, an ITX motherboard packed with all the latest trends and features for mainstream gamers as well as some unique extras hailing from the premium ROG feature set. Read on and find out more about this mATX motherboard!

Intel’s Kaby Lake processors were already announced last year and introduced us to Intel’s new 14nm+ manufacturing technology which is said to improve on efficiency and performance on the existing 14nm process. The earlier Kaby Lake processors which came out were intended for low-powered applications which saw notebooks and other mobile platforms inheriting the new processors first. Today we get to see the products aimed for desktop consumers with the launch of Intel’s 200-series chipset and the new Kaby Lake desktop processors don’t distance themselves from their initial launch counterparts as they are still built on the same 14nm+ process. Intel’s touted improved fine profile and transistor channel strain are capable of providing a more stable platform to deliver more performance via the higher clock rates that the Kaby Lake processors tout than their previous Skylake counterpart.

One of the more important addition to Kaby Lake is support for Intel Optane technology which is essentially technology which allows systems that support it to utilize high-density memory that offers superior improvements over NAND. The 3D Xpoint deseign also utilizes 10 times DRAM capacity in the same surface area which is made possible by slicing submicroscopic layers of materials into columns containing memory cells. The layers are then inter-connected in a cross-point weave via perpendicular wires. Intel Optane offers superior low latency (measured in nanoseconds) and also is capable of retrieving data in a power outage.

Below are a list of known Intel Kaby Lake processors to be launched with the most noteworthy being the flagship i7-7700K featuring 4 cores / 8 threads with a 4.2Ghz base frequency and has a maximum boost of 4.5Ghz. The processors has 8MB of L3 cache with a rated TDP of 91W. The estimated SRP for the i7-7700K is $349 retail. Next up is the Core i5-7600K which is a quad-core processor featuring a 3.6Ghz core frequency and a turbo frequency of 4.2Ghz. It also has 6MB of L3 cache and is rated for 91W TDP. The Core i5-7600K is expected to retail for $239.

The most unique of the known SKUs is the Core i3-7350K. Yes, you read that right, there will be a unlocked Core i3 processor in the desktop Kaby Lake stack. This particular processor is a dual-core part with Hyperthreading support. It runs with a 4.0Ghz core clock and has a turbo frequency of 4.2Ghz. It features 4MB L3 cache and is rated for 60W TDP. Its expected to launch after the initial wave of Kaby Lake desktop parts. The SRP is expected to be $177 retail. This processor has an unlocked multiplier which should really entice performance seekers and overclockers looking to get more from a less costly part.

Complimenting the complete line-up of the Intel Kaby Lake processor family is the launch of Intel’s new 200-Series chipset family. The Intel Z270 is identical to the previous Z170 chipset in terms of PCIe configuration meaning they allow 1×16, 2×8, or 1×8+2×4 configurations with the H270 and H170 offering a single x16 config. Support for dual-channel memory is still present with up to 4 DIMMs available. As always, the high-end Z270 chipset will support multiplier overclocking on unlocked processors.

RGB seems to be trend today and nobody hates to be late to the party more than ASUS. The new motherboards in this generation will feature AURA sync on all ASUS AURA-capable components and will be capable of custom effects. As seen in the product overview, there are also RGBW headers for your own custom LED strips that you can add to your system to create your own lighting configuration.

The interface for ASUS ROG STRIX UEFI BIOS doesn’t venture too far from the main ROG boards. Albeit the interface is completely similar sans exclusive features for the board. Ultimately, the design has remain unchanged, still showcasing the richest interface amongst all brands with tons of tweaking options for overclockers and enthusiasts. Most settings are very open and allow tweaking of the finest features. Moving over to the general board features itself, there are plenty to tweak around like fan speed etc. The BIOS also allows options to save profiles and allow customizations to the bootscreen etc. As this is a new product, there’s bound to be updates but as it right now, its very rock solid.

ASUS lists the following software as included in the ROG STRIX package:

There are some utilities also included with the drivers like the Sonic Radar 3 which is one of the examples of shared utilities between the main ROG family and the ROG Strix line. Overall, ASUS bundles a decent number of software with this motherboard, some you can do without and some that add really good extras to your system like the Sonic Radar 3 which adds a visual display of directional audio on your game which aids in titles like FPS and the likes. ASUS AURA let’s you configure the board colors as well as any compatible AURA device you have connected to your board.

Starting with this generation, we will be shifting our attention to features rather than performance so we’ll keep commentaries on the benchmarks small if none at all. The data provided is for relative comparison only.

We check to see how motherboard makers tune their default BIOS settings and see how it impacts temperatures and power consumption. The system is left to idle for 30 minutes before readings are taken and load data is taken 30 minutes while AIDA64 stress test is running. Power readings are taken for the entire system from the socket. Power draw for the entire system is captured for this test via an outlet wattmeter and temperatures via the brand software and confirmed with AIDA64 and Intel Extreme Tuning.

The ROG STRIX Z270I GAMING shows off some very good numbers in both power draw and temps and this makes it a really great board if you’re intending to cram it in a very tight case with limited airflow. The lower 1.2v default core voltage gives it a noticeable drop in temps similar to what we’ve mentioned in previous reviews. Notice in the thermal image we’re peaking at around 56*C in the VRM area on load which should hover a bit higher with 40*C ambient case temps but still safe enough for daily operations.

ASUS is clearly setting itself up for a wide product stack for the mainstream market. While it has raised the bar for its mainstream line with the ROG STRIX, favoring more premium quality than the previous PRO GAMING line, ASUS has made some overlaps in their stack to address consumer needs. With the ROG STRIX Z270I GAMING, it does away with the extreme power design of the ROG IMPACT models and sticks to a more refined, traditional ITX design. 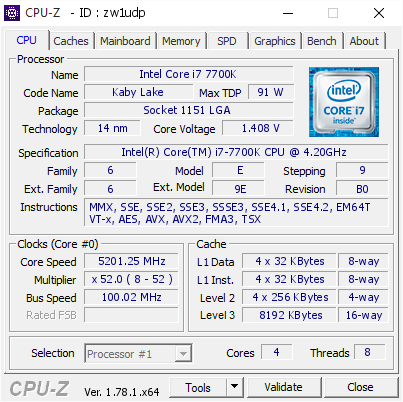 That said, the ROG STRIX Z270I GAMING is still a powerhouse able to sustain a decent overclock of 5ghz on a 7700K and stable enough for daily use. We’ve went ahead and played around with this motherboard and our retail i7-7700K and managed to get a rock solid 5Ghz OC without much tweaking in the BIOS. You can check the validation here. We’ve also tried to achieve a higher 5.2Ghz OC but thermals are limiting our processor from hitting it stable.

Feature-wise, the ASUS ROG STRIX Z270I GAMING is well-rounded able to meet high-end feature requirements of gamers and enthusiasts while still retaining its ITX form factor. The option of having a hidden M.2 slot underneath the heatsink is a great touch and the overall layout is well thought of.

With an SRP of $203 or Php11290, its actually more affordable than previous ROG IMPACT models. With the reduction of bloated features that belong to more high-end entries, the refinement that ASUS did with the ROG STRIX Z270I GAMING is a welcome choice and its overall build quality, performance and feature set make it one of the most ideal choices for high-end ITX motherboard right now.

If you’re looking to build one of the meanest SFF gaming PCs right now, the ASUS ROG STRIX Z270I GAMING is uncontested as of this moment. Great feature set and great quality all in a compact form factor now made more affordable.

ASUS backs the ROG STRIX Z270I GAMING with a 3-year warranty. We give it our B2G Gold Award!

Its months away but with benchmarks already surfacing, its going to be a short Rocket Lake shelf-life