Like other ROG Strix Products, the Mousepad’s packaging features the iconic ROG logo with the splash of the Strix neon colors.

The Strix Edge mouse measures 450mm(L)x400mm(W)has a longer length compared to its width. Most mousepads generally have a landscape orientation or longer width. The Strix Edge is designed for players who play with their whole elbow resting on top of the desk and as an extension for the bottom side to protect your wrist against sharp edges of your desk and still have enough room for mouse movement.

The Strix Edge Mousepad features a non-slip rubber base that eliminates accidental mousepad slides during intense gaming sessions. It also has anti-fray stitching that ensures the mousepad’s durability from being torn on the edges.

The ROG Strix Edge Gaming Mousepad solves the common issues of gaming mousepads without compromising its build quality, performance and aesthetics. It’s vertical orientation provides additional comfort as it eliminates overall wrist stress caused by the sharp edge of your desk. It has a flashy design that wont fit most peripherals and desk setups unless you have a full ROG setup or  pattern your RGB lighting with the mousepad’s color theme.

The mousepad’s surface is inclined to speed due to its smooth surface. It’s compatible with every mice that I’ve tested including the ROG Pugio, ROG Gladius, Logitech G603 and Zowie EC2A. Its smooth surface allows you to glide your mouse with ease making flick shots in FPS games easier. Its size also makes it convenient to carry around on the go.

With the ROG Strix Edge having an SRP of Php 1,590, it is definitely a premium priced product considering alternatives, especially extended ones. Ignoring the price tag, the ROG Strix Edge is a good option for gamers with limited desk space as its vertical orientation compensates the lack of surface area.  We give the ROG Strix Edge our Performance Award! 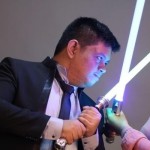 Peak Intel gaming laptop with an opto-mechanical keyboard and up to an RTX 3080 laptop GPU, the ROG Zephyrus S17 continues the 17" Zephyrus...

The ROG Flow x13 is another concept release from ASUS but this time around they might found the right niche to target. Find our...