Its been a good year for enthusiasts with plenty of cases getting released in recent months but most of these are focused on the mainstream and enthusiast markets leaving budget builders to settle for generic light-material chassis which are aplenty in the market right now. Fortunately though some manufacturers have taken it upon themselves to deliver chassis solutions to cater to the entry-level and budget segments whilst still retaining enthusiast-class and modern features to accomodate modern day hardware. We’ve seen some love from COUGAR for the mATX market and now they’re stepping it up with a midtower chassis. COUGAR has sent us the Archon midtower chassis for review so join us as we check-out their new budget case.

COUGAR has been steadily gaining grounds here in the local market and there seems to be no sign of stopping for the Taiwanese company in getting more piece of the pie from its competitors. With every new release, we see Cougar bring more and more enthusiast features and bring them down to more affordable levels. When the Â Cougar SpikeÂ was released, the company showed that modern features nor tailored chassis solutions don’t have to cost much to bring the goods. The Spike was an mATX case and those needing a larger case were left to look elsewhere but that changes with the release of the Archon. Today we’ll be checking out this midtower and see if it delivers all the goods under that Php1,700 asking price. 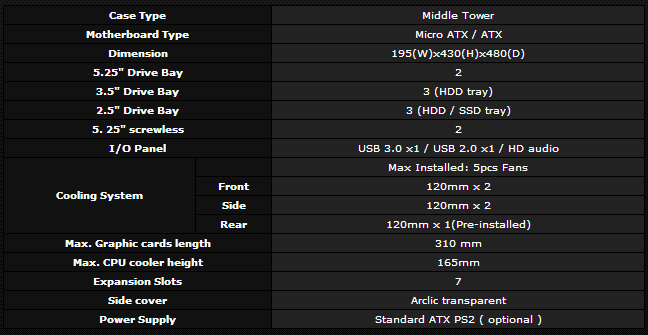 The Cougar Archon is packaged in a brown cardboard box with lineart prints adorining the case. If you have problems identifying the case, the gigantic ARCHON text should help a bit.

The case is help front-side-up with 2 styrofoam padding the upper and lower sides. A plastic bag protects the case in transit.

The Archon’s side panels features an embossed portion in the center. This should allow some space for cable management behind the motherboard tray. The other side panel has a mesh window as well as an acrylic window. Curiously the acrylic window is placed around the HDD/SSD trays which doesn’t show much interior. The mesh has 120mm fan mounting holes for additional fans.

Going over the front and back, we can see that Cougar has opted for a clean mesh front with the bezel adding a touch of detail to the entire look. The top area has the power buttons, USB ports and audio jacks. Checking out the back, we can see that the case accomodates a bottom-mounted PSU. A single 120mm fan is included for exhaust duties. The upper part has two grommeted holes for watercooling options.

Here are some shots of the case in other perspectives. The case has a rugged look to it even though it is rather small compared to most midtowers. The Archon does not feature a top-exhaust vent. So closed-loop liquid coolers are restricted to 120mm options.

Here’s a closer look at the top part of the front panel. Cougar did a great job designing the buttons to house the status lights and also match the design. We’d like to question Cougar’s decision on going a single USB3.0 and USB2.0 port. USB3.0 is backwards compatible and Cougar should’ve gone with running two USB3.0 ports.

If you haven’t noticed it earlier, the top PCI cover is missing. You’ll see why later. All in all we have a total of 7 expansion slots. With the exception of the top slot, all the covers are break-away style and if you take one of them off and decide to leave them unused later, you have to get yourself slot covers.

Cougar includes a simple documentation and installation screws with the case along with some zip-ties. The top slot cover is here. Our sample came with two bags of this kit but please be advised that the package should only include one.

This is where the Archon really start showing off. First up, the motherboard tray is bright orange, although the major portion of which will be covered by the motherboard the remaining areas should act as a nice highlight. The rest of the internal is accentuated by more orange, include the drive trays and release locks for the 5.25″ bays.

The Archon features cable management holes on the edge of the motherboard tray.

For another touch of detail, Cougar has went with a dotted-hole style in the internal. EKWB fans, should be familiar with this design.

As mentioned earlier, Cougar includes a single 120mm fan for exhaust with the Archon. Sadly, its not in orange. Would’ve been great if they included their Vortex model fan as the exhaust.

Here’s a shot of the space behind the motherboard tray. Not a lot, but with the side panel have a raised area, there should be no problem routing cables provided you don’t have a ton of cables from

The Archon uses plastic feet with nothing really special in the bottom area. The PSU intake vent has a removable filter though for easy cleaning.

The Archon features a drive cage for three 2.5″ drives and three 3.25″ drives. Great for people who don’t want to mount their SSD’s in brackets.

The drive trays for the 3.25″ drives split apart in the middle when installing a new drive. The drive is secured by pegs that lock onto the drive’s screw holes. The 2.5″ trays attach via screws on the base of the tray.

If you haven’t noticed it yet, the Archon only has 2 front 5.25″ bays although internally it supports up to 3. One of the 5.25″ bays has a slot for a 3.25″ accessory like USB3.0 front panel tray but Cougar did not include a replacement front cover to accomodate such an accessory. Notice that the polka-dot venting holes are also on the other side of the drive cages. The front panel has a filter that covers up the front internally and this filter also acts as the mounting area for the 120mm fans. If you’re planning on watercooling in the Archon, you’ll have to get a bit creative on looping your tubes.

The Cougar Archon aims to target the budget-conscious gamer who wants a chassis that can accommodate a full ATX board as well as long graphics cards and other modern features for a low asking price.

The Archon’s external look is subtle yet leaves a statement. The clean front panel doesn’t come off as trying to be anything and the general design is more on function rather than looks. The orange highlights in the inside gives off a great feel and a lot of fans of this color scheme will have an easy time picking this case.

That said, we would to call Cougar’s attention to some questionable design ideas like the side window being where it is. It looks like they just put it there for the sake of being there. Another is the inclusion of only one USB3.0 port where its clear that they could’ve went with a pair saving on cabling.

With an average e-tailer price of US$50, the Cougar Archon is handsome offer. As of this writing though, the case is still not available locally although it was stated the it should’ve been available by August. We will update this review once local availability is confirmed.

At US$50, the Cougar Archon competes with Aerocool’s VS3 which unlike the Archon features a more bolder, techy theme. Fans of simpler designs would easily opt for the other. In closing, the Archon has all the necessary features to serve as home for any budget build and with price, it should fit in well with said builds.

We give the Cougar Archon our Value Award and Recommended Award!

Become a hardware specialist with ASUS' ROG Specialist program. Read on for more details and how to register!

With the direction motherboard vendors are going these days, performance has been set aside in favor of looks and features and the decreasing number...

We open the new year by taking a look at GPU performance tiers while we walk you through our new concept of presenting a...