So late last year, I was in the market for an M.2 enclosure. Much of what we have in the market is pretty much made by Chinese companies which I’m not comfortable dumping $100 or more in and get something that overheats or worse, something that doesn’t saturate USB3.1 Gen2. My plan was to use the drive as a test platform for Linux as we want to provide quick and easy verification if a motherboard works with Linux as well, amongst other things. But going back, options were limited and Silverstone had no regular stocks that I could get and the SilverStone options were limited to Type-A which limited my options to the Type-A port unless I introduce another point of failure via a converter plug.

Such was my life until ASUS came up to me and said they have an M.2 enclosure coming. I was under the impression it was for their Pro brand but lo and behold, it was ROG.

ROG STRIX to be exact. Today, we’ll be taking a look at the ROG STRIX ARION USB3.1 gen2 portable M.2 SSD enclosure. To be clear, these don’t come with SSDs inside, so that was provided to us by our friends at Seagate and we’ll be using the Seagate FireCuda 510 1TB M.2 NVMe SSD. You can check out review of the Seagate SSD here.

With that said, lets check out the ROG STRIX Arion and see how it performs! Read on. 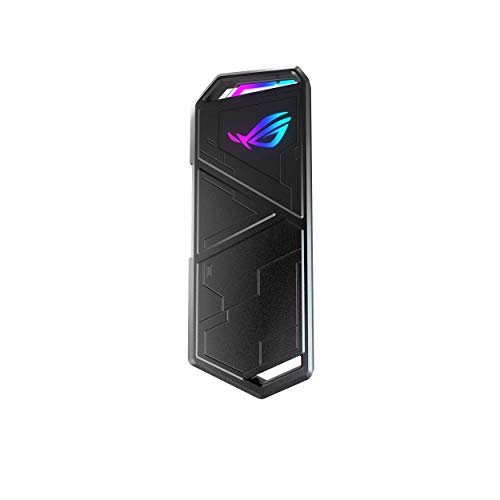 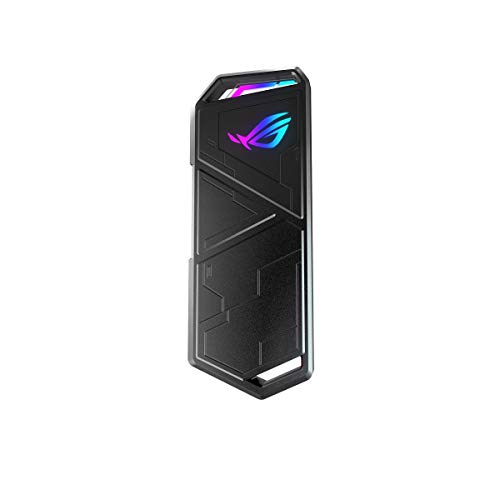 ROG packages the Arion in their signature ROG STRIX packaging: RGB logo with the product on front. Nice shot on the RGB logo on the product in the front of the box although we have stress it immediately, it cannot do that. At the back we have some details and feature highlights of the Arion.

Inside the package we have a couple of things to go through, for the Arion itself yo get the ROG Strix Arion enclosure, a bumper case, a carabiner hook, and a SIM tray removal tool on a large sheet of instructions on why you have this.

The included carabiner hook has a velcro which secures itself once in the loop. The carabiner itself in the shape of an R, obviously some designer at ASUS felt the urge that it had to be an R instead of an all-metal carabiner with the ROG engraved in it.

As condescending as that last statement was, if there’s anything that’s a real turn-off in the Arion, its the carabiner. Since it uses a giant loop at the end, you can use a keyring and a proper hook or clip to fasten this to your person if you’re bringing it out but otherwise, the included carabiner is flimsy and I can break with two fingers with little effort and despite my need to prove a point, I decided not to.

The ROG Strix Arion is 12mm thin. Its thinner than most mobile phones but ASUS made sure the metal is dense enough to dissipate heat so there’s a certain heft to the Arion.

With the rubber bumper installed, you really won’t feel like its there unless yo need to remove the drive so we highly suggest keeping it on.

Here’s the Arion powered up. ASUS has integrated AURA SYNC technology which you can toggle and play around with via Armoury Crate or AURA SYNC. Its not a lot but its a feature. Something I’d actually never imagine given the other market offerings are pretty much just silver boxes.

To install your SSD on the ROG Strix Arion, you’ll need to take off the bumper and locate the eject button whiich you can only access with the SIM card tray pusher or a similarly thin needle or pin. The button is quite shallow but gives a good feel of how narrow you need to go. The top case loosens immediately once off. You’ll need to remove from the sides, not the top.

The cover of the drive tray features heatsink pads for dissipation while the drive mounting is on the main body. As you can see, the ROG Strix Arion supports up to M.2 2280 size drives with M.2 2230 as the smallest. The drive supports both M and B+M key drives. As I don’t have M.2 SATA anymore and I have to confirm with ASUS if M.2 SATA works but no official published document cites this.

You’ll need to remove the retention screw and line it up with your M.2 SSD. Majority of SSDs for mainstream will be in the 2280 form factor but smaller sizes exists. As seen above, here we have our Seagate FireCuda 510 on the Arion.

Note: Please keep in mind that USB3.1 gen2 is 10Gbps, and while ASUS lists this as a USB3.2 gen2 device, its still the same spec. USB3.2 gen2 2×2 is the 20Gbps spec standard. The Seagate FireCuda 510 we’re using in this test has been tested to go upwards of 3000MB/s and more in read/write tests. Also note that these results are for reference only as your mileage will vary with your M.2 device.

ATTO Disk Benchmark benchmarks a drive’s read and write speeds with increasing file sizes and graphs them. The results shows us a good idea of how the drive performs on file sizes, showing us read and write speeds and how consistent they are. The higher the better of course and the the more consistent the numbers, the better. This also shows us if bottlenecks exist for either the controller or the device itself.

Anvil Storage Utilities is a disk benchmarking utility designed to offers a simpler method of scoring a storage device’s performance for both read and write as well as overall. The scores are presented in scores from the benchmark window and are representative of the score of the drives but are completely unique to this benchmark alone. Higher scores are better.

AS SSD benchmarks SSDs and provides a score. In our charts, we’ll show you the bandwidth performance results instead, specifically for Sequential and 4K . AS SSD uses synthetic read/write tests with selectable test size. Our standard test uses 1GB sample data.

Crystal Disk Mark is storage benchmarking software was developed by “hiyohiyo” of Japan, and is available for free. This benchmark measures sequential, and random read/write speeds of storage devices.

ezIOmeter is a user-friendly port of the popular IOmeter benchmark. IOmeter is a professional load testing tool for measuring storage performance for enterprise solutions.

Testing out the AURA SYNC on the ROG STRIX Arion M.2 drive enclosure

ASUS markets the Arion as two things: cool and fast. And by cool we mean performance cool. We’ll talk about that later so we can talk about drive performance first; the ROG Strix Arion uses USB3.1 Gen2 (or USB3.2 Gen2) which you prefer but ultimately it has 10Gbps bandwidth to work with and that equates to more or less 1000MB/s of data transfer bandwidth. So that means that if you have older M.2 drives that you don’t plan to stick in your rig, you can plunk down the $59 for the Arion and give it some extended lease on life. Performance-wise, its limited by its tech and that’s alright.

Now moving on to cool, I personally feel there’s really little reason to worry about temperatures for this drive unless you’re using it as a work drive or scratch disk and have data transfers happening actively. Still, here’s a shot of our ROG Strix Arion + Seagate FireCuda 510 1TB under Crystal DiskMark workload. We’re seeing relatively normal temps. Note that ambient is 30*C Manila temperature. So going back to cool, I can at least confirm ASUS is on point in that but what’s also on point is the visual styling that ASUS ROG has imbued into the Arion. Amongst all enclosures that I have seen, and I’ve searched far and wide, the ROG STRIX Arion does have personality thanks to its ROG aesthetics. And while I can be convinced that my other preference, the SilverStone MS11 does look elegant, the gamer in me would easily jump with ASUS. Not to mention anything under ROG has a particularly admirable after-sales support.

So ultimately it all boils down to price. My other option, the Silverstone MS11, is priced at $59 and pretty much features the same feature set as the Arion. The main dfference, the hook slot, the RGB and aesthetics. We’ve seen the MS11 in COMPUTEX last year and while I’m confident it can subdue thermals from many an SSDs, the Arion takes the crown for me any day. But don’t take my word as law, in a more professional environment, the MS11 will easily be the choice especially if you’re boss is paying for and you don’t want your gamer side showing but for all intent and purposes, the MS11 is a hard find here in Manila and with the Arion being readily available, its a simple choice.

So should you buy the Arion? Tough question. If you’re buying it looking to build your own portable hard drive, you’ll get better value with the readily-built solutions from most Taiwanese brands. The Arion is mostly intended for power users that have outgrown their older SSDs and want to extend the life of their SSDs.

The ROG Strix Arion is a nice venture for ASUS in uncharted waters but the choice to pursue the ROG branding means they mean to address builders and tech-savvy consumers rather than a more professional market. Regardless, it still offers great adaptability and functionality for the price.

I still wish it had a metal hook and a more secure strap. And for that I won’t recommend this for outdoors use unless you replace the strap. And I’m docking usability points for that.

ASUS backs the ROG STRIX Arion with a 1-year warranty. We give ASUS, a very rare one for the company, our B2G Best Value Award!