We’ve taken a look at plenty of SSDs here in the labs but we’ve yet to see a Samsung SSD make an appearance in our library so it’s actually kind of amusing that our first Samsung SSD for review isn’t the glorious line of internal SSDs we’ve coveted but rather their latest portable offering: the Samsung T1 Portable SSD. Announced earlier this year, the Samsung T1 is an engineering marvel coming in at only a 71mm x 53mm frame with a 9.2mm thickness, its almost as thin as its USB cable and weighs in at only 30grams.

This small size doesn’t compromise speed though with the Samsung T1 rated for 450MB/s wread and write performance via USB3.0. We managed to get our hands during the local Philippines press launch of the Samsung T1 Portable SSD and we’ll share our initial impressions in this hands-on review. Read on! 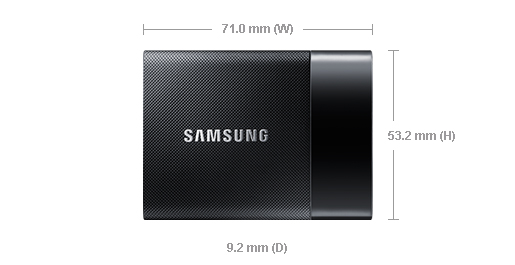 The Samsung T1 Portable SSD is small. Really small as we’ve described earlier. Samsung has designed the chassis to have an elegant textured finished with one end of the Samsung T1 clad in a gloss surface. A metallic Samsung logo is emblazoned on one side with one of the narrow ends home to the USB3.0 connector port. 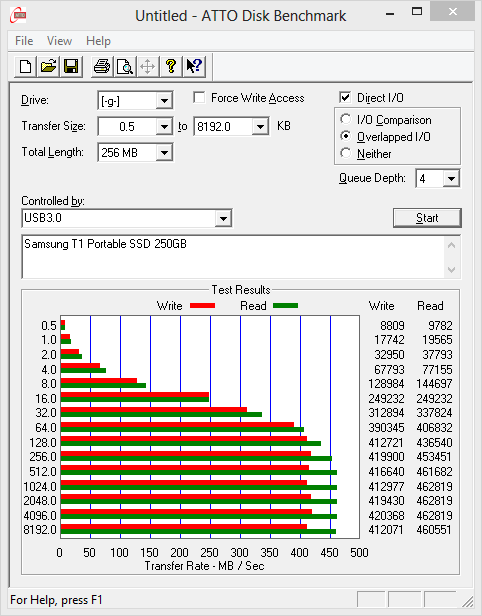 The drive is rated for 450MB/s and as we can see in the screenshot of our benchmark above, Samsung is a bit modest in the rating with read speeds definitely peaking at 460MB/s for read performance when we go past 256MB file size. For write speeds though, numbers are a touch above 400MB/s with the Samsung T1 peaking at 420MB/s write speeds. If that doesn’t impress you, remember that this is a USB3.0 device. The fastest USB3.0 SSD we’ve tested is around 256MB/s only. These are incredibly fast. As we’ve said, that’s a 10GB movie file in just 10 seconds or less. 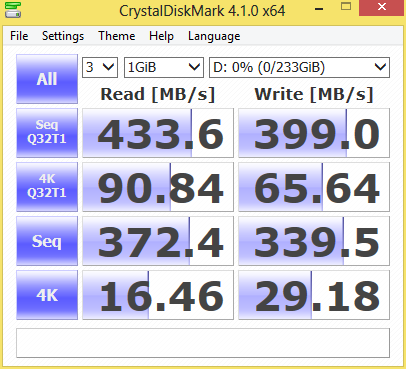 [popover body=”Crystal Disk Mark is storage benchmarking software was developed by “hiyohiyo” of Japan, and is available for free. Crystal Disk Mark measures sequential, and random read/write speeds of storage devices.” placement=”top”]Crystal DiskMark[/popover] is our next benchmark which pretty much shows us what we’ve already seen with the drive averaging around 400MB/s. Note that we’ve ran these benchmarks consecutively which might have skewed the performance but by nothing significant and we can see the a clearer picture here of how fast the Samsung T1 is in handling smaller file sizes. Still, these drives will mostly see action for large transfers and that 400MB/s R/W performance is definitely something to be happy about.

It’s easy to go about this review saying how fast the Samsung T1 Portable SSD is but as demonstrated in the product launch, the Samsung T1 can take a pounding. Dropped from a height of 5ft over  and over and over again, our sample drive managed to keep on delivering its rated speeds.

We do not condone violence towards Solid-state Drives but the Samsung rep insisted.

Couple that durability with the data security features of the Samsung T1 allowing the users to safeguard their data prior to use and you have a data vault the size of a business card. 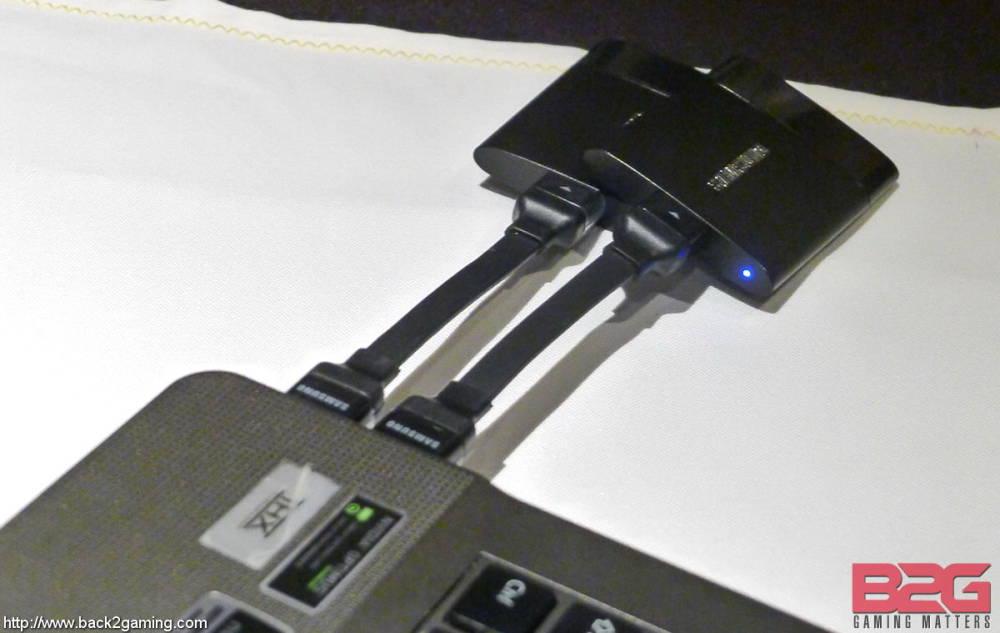 Ultimately, it all boils down to price and with the smallest capacity of 250GB announced to hit stores now at Php9999, it’s going to be a tough call for a lot of folks. The usage scenario here is simple though: people who want speed regardless of cost but want something in a more standard interface like USB3.0 for professional work will find the Samsung T1 Portable SSD a definitely good choice and if that doesn’t fit the size and durability advantage versus a standard portable HDD is simply hard not to like. Given the speed, it could easily run as a boot drive for native USB3.0 controllers e.g. Intel Z87, X99 and Z97 or other compatible devices and OS’.

While you could get away with bashing a Samsung 850 EVO with a SATA/USB3.0 adapter which should cost a little bit more than half of the PH SRP of the Samsung T1, its hard to beat the size advantage of the Samsung T1 making it one of the most flexible portable storage options out there. 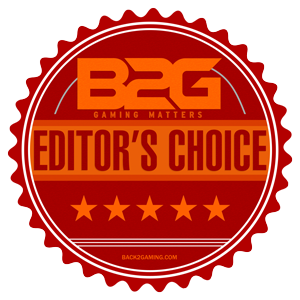 In this article:review, samsung, ssd, storage

TEAMGROUP is joining the 7000MB/s Gen4 club with their latest T-Force SSD: the CARDEA A440

Synology currently has two 4-bay options as part of the x20 Plus class of NAS. Today we have the Synology DiskStation DS920+ for review....

Samsung seems to be happy with their stab at high-end PC gaming displays as they update the 9-month old Odyssey G9 with a newer...

We have our eyes on you, ADATA XPG. ಠ_ಠ No more bait and switch.