Seagate has always embraced the idea of marrying SSDs and HDDs into a single form and it was way back a few years ago that they first launched their first SSHD hybrid drive into the market. Fast-forward a few years and now we have the newest generation of SSHDs from Seagate. The company aims to bring faster performance than normal hard drives using what it calls adaptive memory technology wherein the drive adapts to the usage patterns of the user, keeping the most frequently used data in the faster solid-state part of the drive for quick access. Today we take a look at the latest line of these drives in this Seagate Desktop SSHD review.

Seagate is a familiar name in the storage industry and practically synonymous with HDD storage, and that has been their major business since their inception but with the dramatically changing landscape in storage needs of consumers, the reigning kings of HDD solutions have to play at a whole new level with the increasing demands of gamers and power users. Seagate introduced the SSHD, offering bulk storage with significant performance and responsiveness advantages in one single product. Let’s check out the Seagate Desktop SSHD in this review. 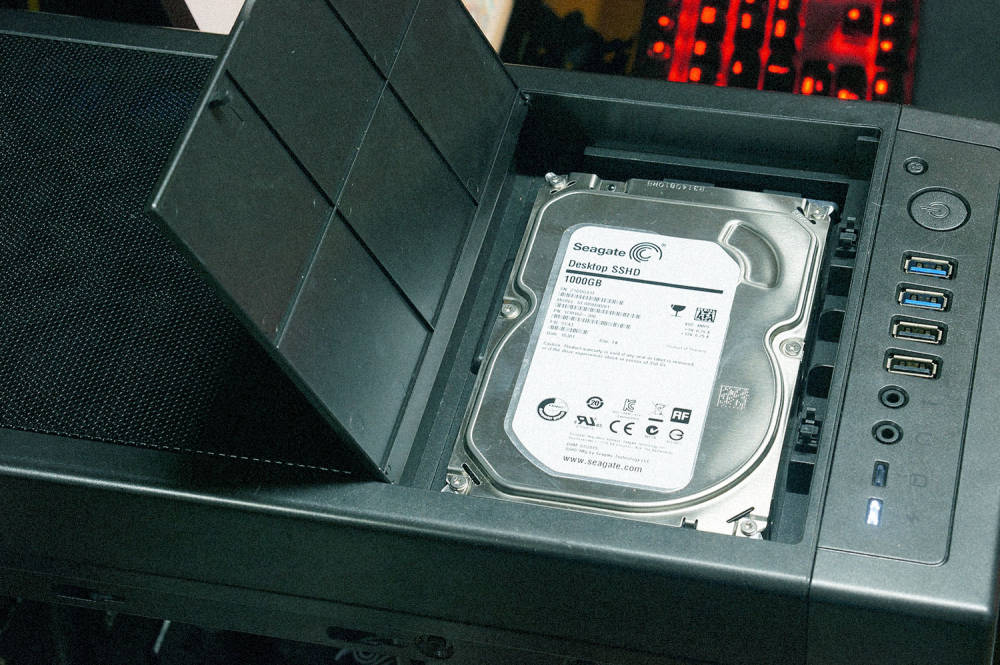 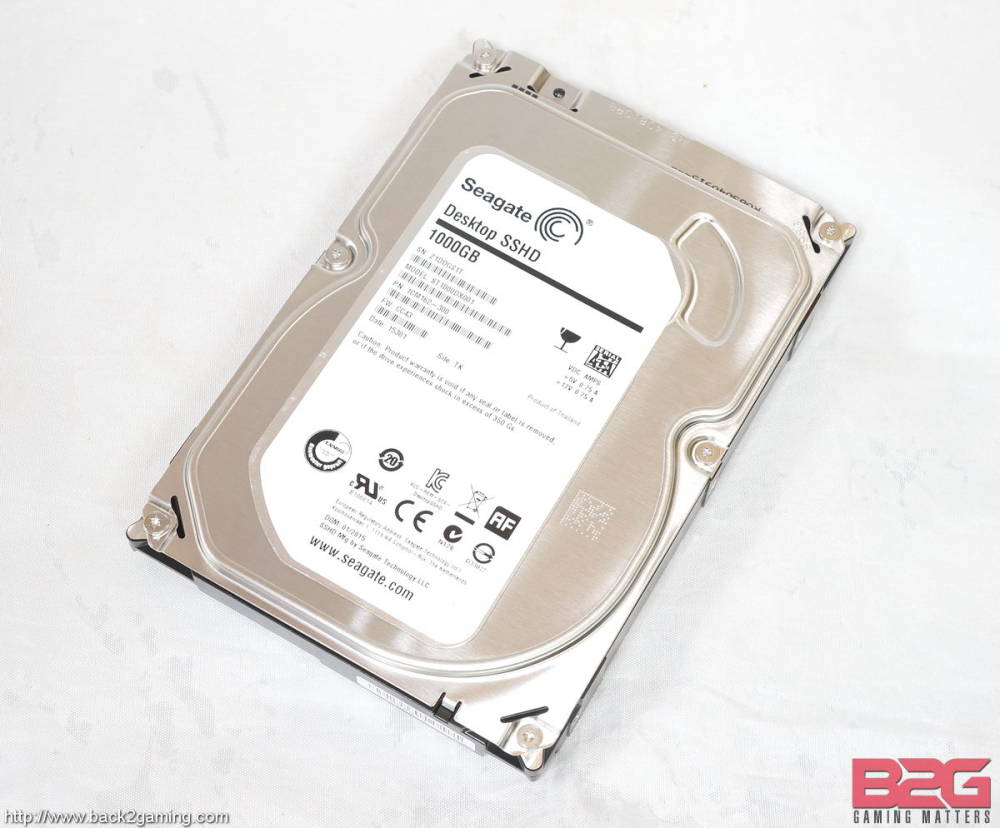 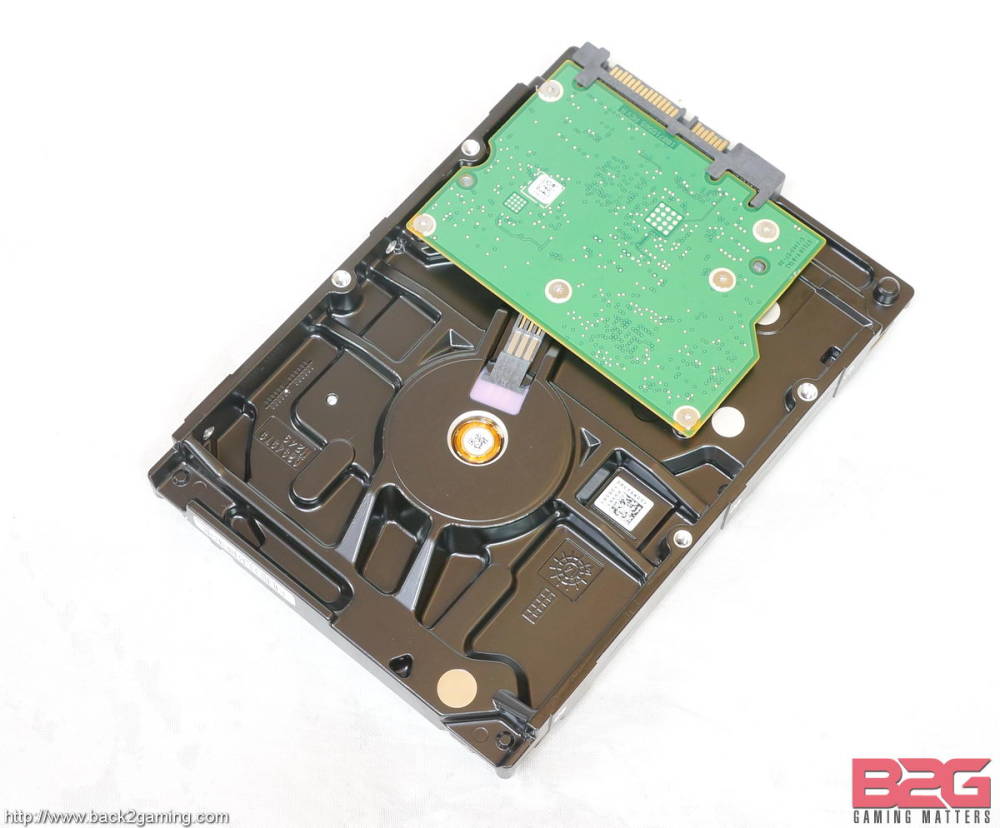 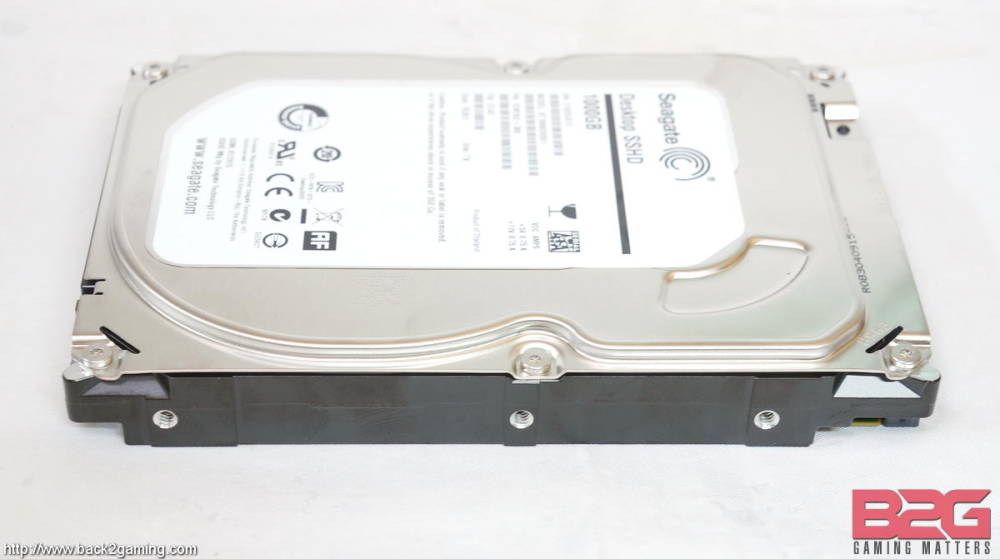 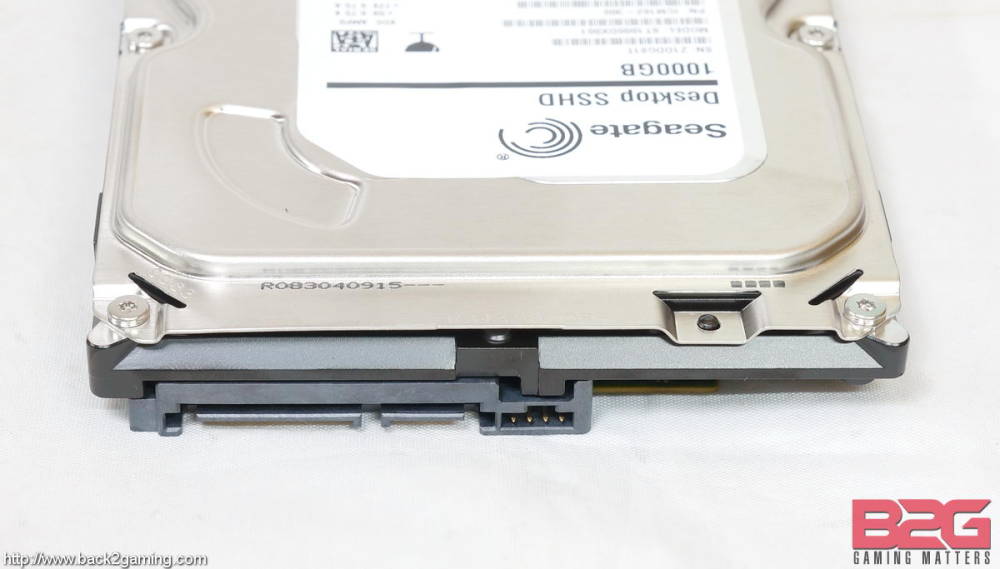 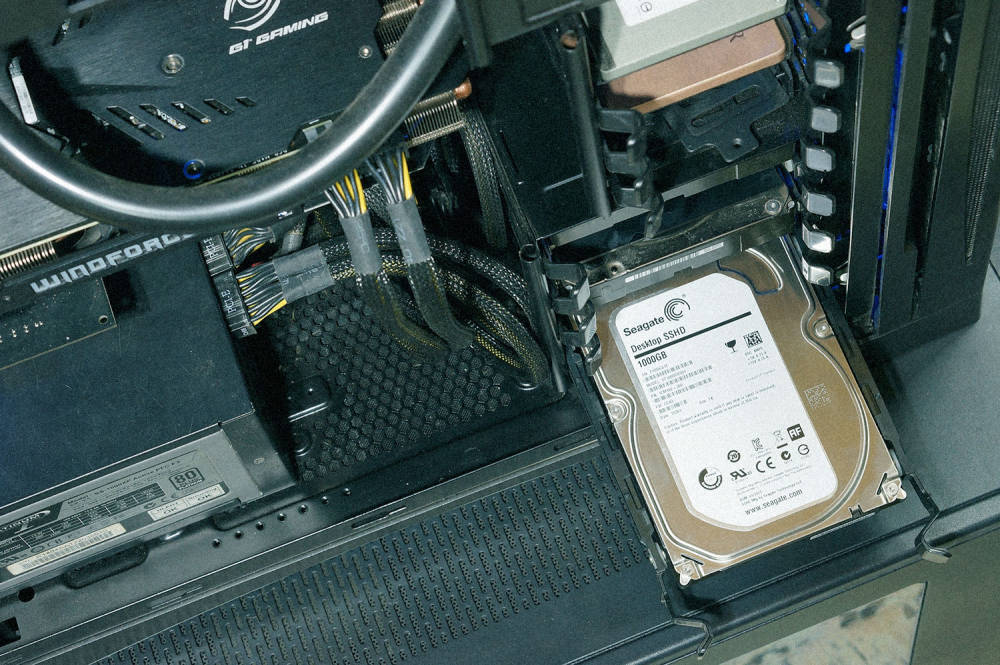 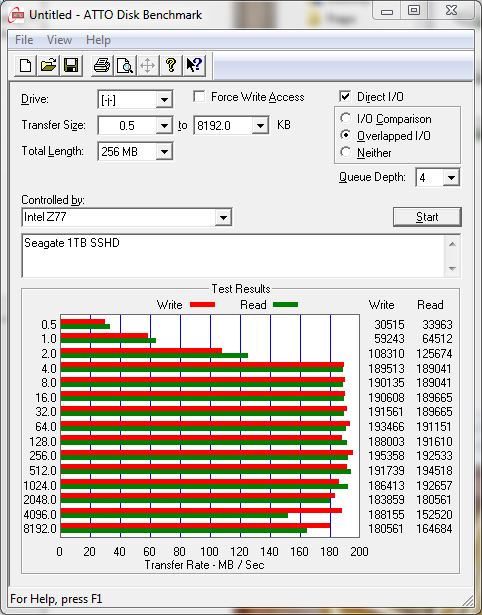 For potential write testing, HD Tune was used to measure the drive’s write performance. Again, we focus on the average results for real-world relevance. 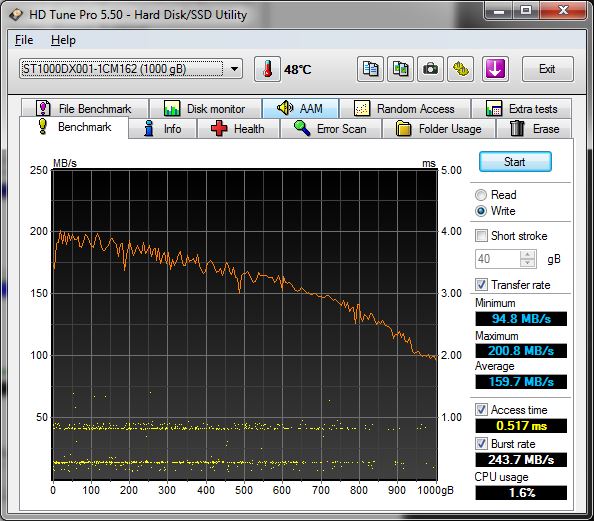 Crystal Disk Mark is storage benchmarking software was developed by “hiyohiyo” of Japan, and is available for free. Crystal Disk Mark measures sequential, and random read/write speeds of storage devices. 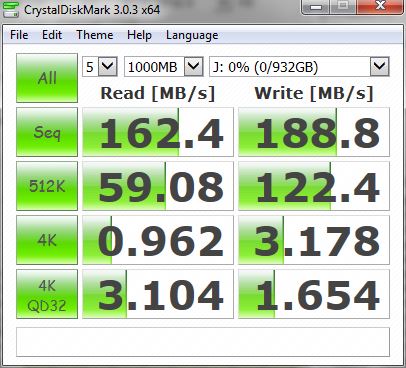 We’ve taken our compression test files, a collection of images, documents and other files ranging from 1KB to 50MB amounting to 3,343 files for 3GB and a single, large 12GB file. We’re posting the raw transfer results for your reference. Test data is copied off a PCI-express SSD. 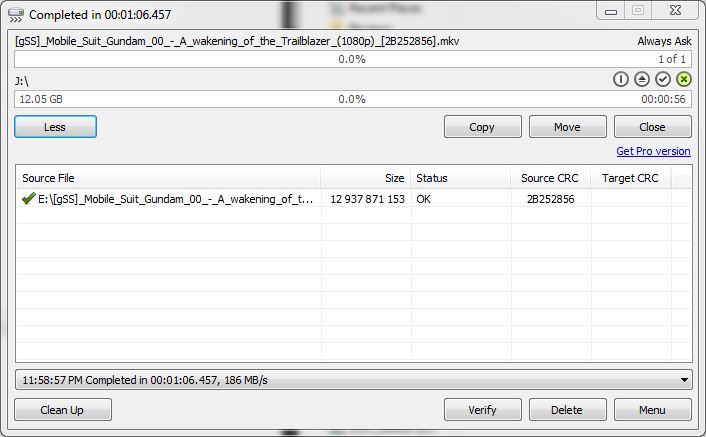 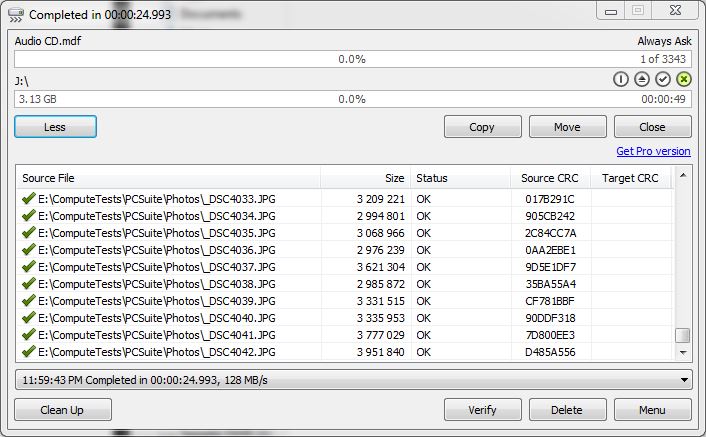 Now we check out performance when we fill the drive with random files amounting to more than 50% capacity and running our benchmarks a few times then letting the drive rest then finally running to get a picture of how the drive performs during such use. 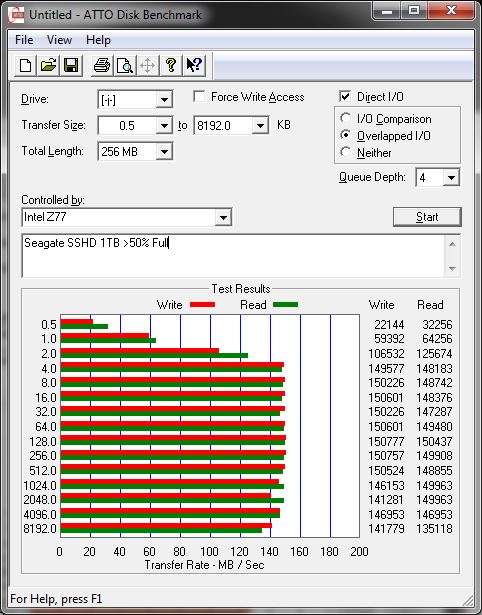 We can see the drive reverts to its rated drive speed meaning the SSHD hasn’t applied adaptive technology to our benchmark given that it deletes its files after running. In a real world sense, the adaptive technology would benefit OS or application files and of course, game files. Say for example you play a lot of Diablo 3 which is a 13GB installation, the most common files are cached in the SSD portion of the Seagate SSHD and quickly gets loaded so you get into the game quickly. This applies best to FPS games and to some extent MOBAs where level textures are loaded when you cross certain areas of the map, sometimes causing framedrops and slowdowns which could easily be a life or death situation once you get into a clash or firefight. 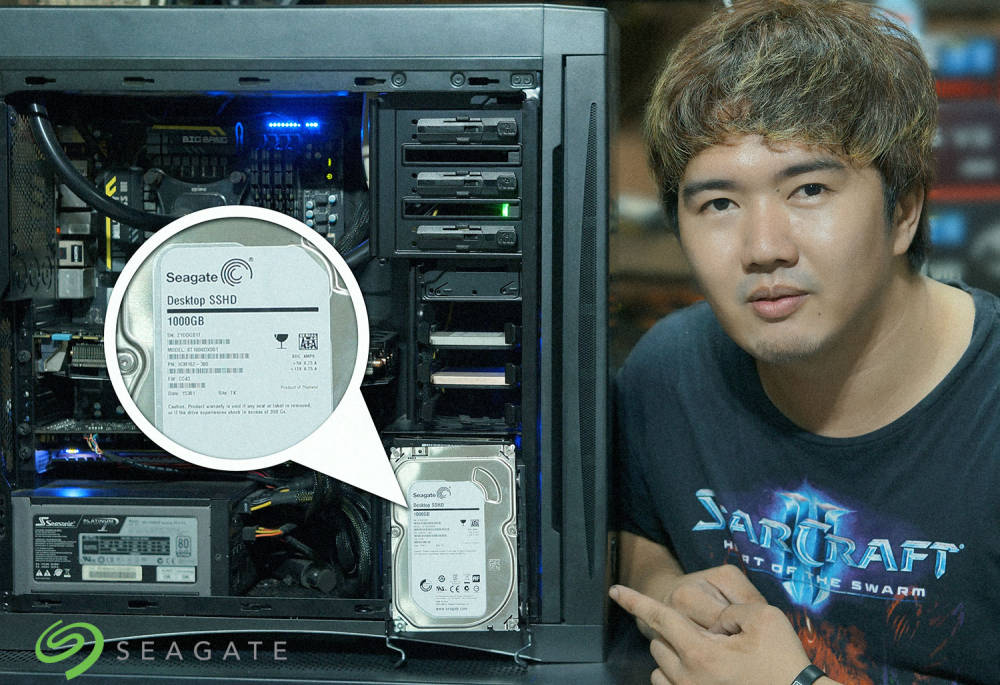 The Seagate SSHD presents a more competitive solution of achieving higher performance for read access together large capacities for bulk storage without the need of buying separate products and certainly a more affordable option than a multiple disk setup. Seagate addresses two issues that most gamers and power users encounter when choosing a storage solution but are faced with budget or space constraints:

There are plenty of other scenarios where the Seagate SSHD would triumph but as most folks are comfortable with buying an SSD for their usage, it’s the consumers that want to save money for an upgrade like a faster GPU or CPU than their storage.

Overall, the Seagate Desktop SSHD is an effective solution that a certain portion of the market, namely budget gamers, can appreciate. They get the benefit of read speeds from an SSD and the large storage capacity of an HDD. While it doesn’t break any performance records, the Seagate SSHD is still an impressive product due to its versatility.

The Seagate Desktop SSHD comes in 1TB, 2TB and 4TB capacities and is backed by a 3-year warranty. We give it our B2G Silver Award. 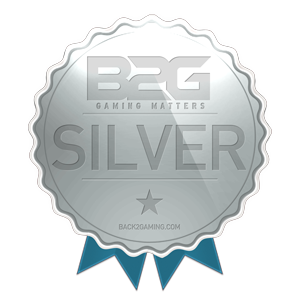 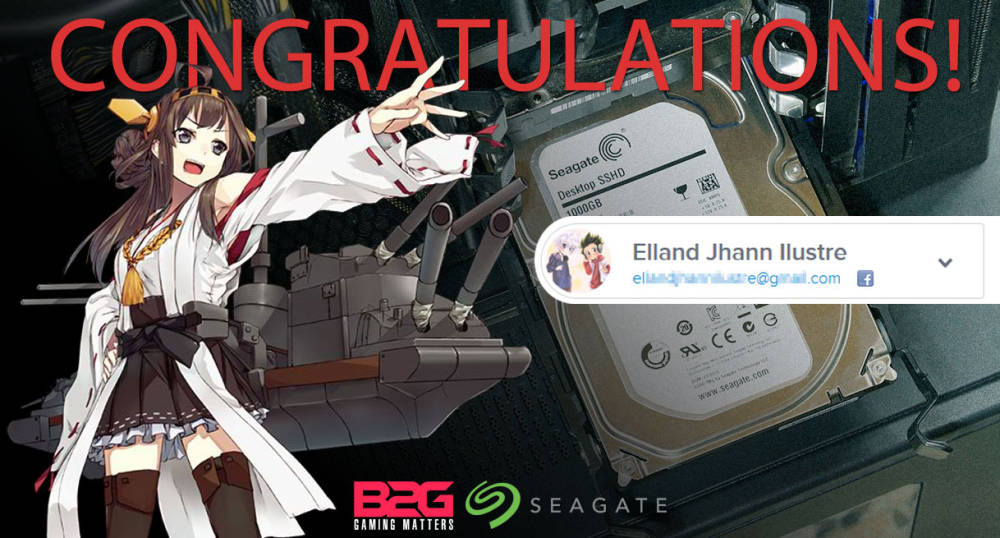 Congratulations to Elland Jhann Ilustre! You are the winner of a brand new Seagate Desktop 1TB SSHD! Please email us using your Facebook email address for confirmation.

THIS GIVEAWAY HAS CONCLUDED.

We’re giving one of you lucky readers the chance to win your own, brand new Seagate Desktop SSHD 1TB drive. All you have to do is simply answer the questions in our giveaway app below. It’s that easy. Optional questions grant you bonus entries for more chances! All the answers are in this review, feel free to be creative with your answers.
Seagate SSHD Giveaway

TEAMGROUP is joining the 7000MB/s Gen4 club with their latest T-Force SSD: the CARDEA A440

Synology currently has two 4-bay options as part of the x20 Plus class of NAS. Today we have the Synology DiskStation DS920+ for review....

We have our eyes on you, ADATA XPG. ಠ_ಠ No more bait and switch.

GIGABYTE's expands its VISION content creator lineup with the VISION DRIVE 1TB External SSD. Supporting USB3.2 Gen2x2, it can do around 2000MB/s sequential. For...