By Haoson
GamesReviews
on June 28, 2011
ShareTweetSubmitEmail

To be honest, if it wasn’t for the Sony Welcome back promo, I wouldn’t have this game on my PSP. I found it tacky and to be honest a game that isn’t really worth the money I would pay for it. After playing through the campaign and trying to play multiplayer, I found that my distaste for ModNation Racers was, unfounded.

To put things in perspective, I was a big Crash Team Racing fan back in the days of the Playstation. Me and my cousins would often play round after round after round of CTR with the multi-tap then and whoever loses would be replaced. Since I didn’t own a N64 back then CTR was the next best thing and the game did deliver since I still have recollections of epic battles we’ve had to this day.

Ever since then I never really touched a karting game. Then here comes ModNation Racers, a game that’s been heavily marketed by PS spokesperson Kevin Butler (which sadly didn’t make a good case for me, regardless of how epic he is). 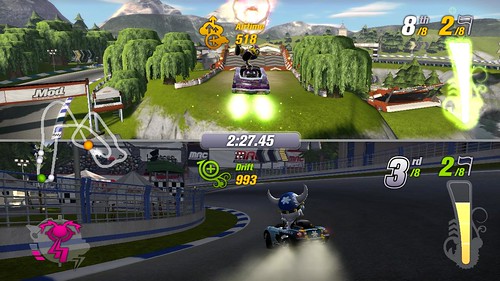 The game’s pretty tight as a karting game. The controls are simple enough and the game’s physics engine is easy to get a grip on. The weapon system is simple enough and the variety of weapons in your arsenal is reminiscent of CTR more than Mario Kart. The game’s boost meter provides the oomp in most races because it doubles as a speed boost and an offense-defense meter. With the boost meter you can well- boost and you can also do sidewipes and stomps which is ModNation Racers’ version of kart based attacks. The boost meter also can serve as your defense because you can summon shields to protect yourself from environment and player based attacks, as long as you have enough on it.

Racing on the other hand is a challenge. ModNation Racers has a Dynamic Game Difficulty Balancing system in place to ensure that your races are as fast-paced as you’d like them. I can personally attest to that since most of my race finishes would only have a millisecond difference. The only time that I had more than a second gap with the second placer is that when I pushed the boost till the meter’s gone just before I zoomed through the finish line. In fact most of my wins were hair-raisers that I actually would often breathe a sigh of relief upon race completion. I haven’t even started with the race goals you need to accomplish to get more stuff to customize your boombox (kart) and your racer.

So moving on from the game’s race difficulties- I’m going to have to focus on the game’s coup de grace which is mainly it’s customization features. ModNation Racers’ customization feature is very robust which reminds me so much of Little Big Planet on the PSP. The map creation feature is also very robust and you can almost do everything on it. You still need to “study’ the map creation process though since with everything you can do on the map, it’d be hard to start everything from scratch without any plan whatsover, unless your an artist or you have the gift of creation.

How to Secretly Track an iPhone without Permission – Spyine Overall, ModNation Racers is a game that you shouldn’t take lightly. On one hand you have a very engaging and challenging solo play and on the other you have a very well made customization system. I wasn’t able to really delve into the game’s multiplayer feature since there aren’t a lot of ModNation players out there for me to play against with. Going online is a laugh as well since the internet connection here is a laugh too.

The other saving grace for ModNatioN Racers is the game’s story mode. Even if the storyline isn’t the best there is, you’d have characters which seem to be typecasted from several pop culture references (I want to say Celebrity Deathmatch). ModNation Racers is a game that can be at par with CTR and Mario Kart- but it’s not good enough.

Still it’s a prettu decent karting game and if you have friends to play it with- I’m sure it’d double the fun.